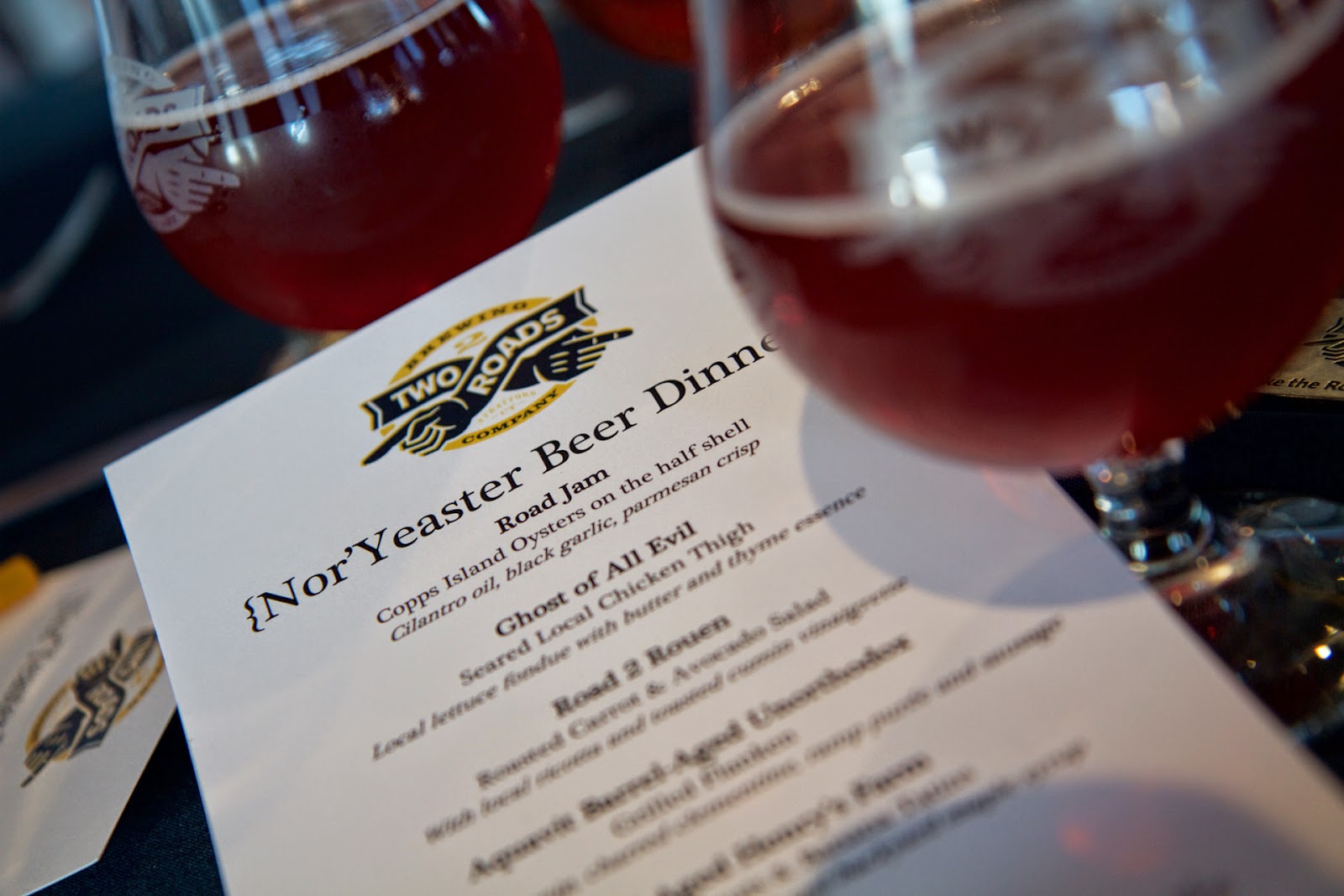 A couple weeks back we attended a beer pre-release dinner at Two Roads featuring some super special brews paired with food by our good friend Chef Plum of Plum Luv Foods. What could be better than an evening of Connecticut beer paired with Connecticut food?

Let’s immediately get down to the details: 5 beers. 5 courses.
Beer: Road Jam
Food: Copps Island Oysters on the half shell with cilantro oil, black garlic, and parmesan crisp
Road Jam is a summer seasonal beer. It’s a wheat ale fermented with red and black raspberries and fresh lemongrass. There is just under two pounds of berries per case of beer. While I am not a big fan of fruit beers, Road Jam is refreshing, light and only moderately fruity. Most of the fruit and sugars ferment out leaving it more tart than sweet. Plus, the lemongrass offers up some hoppy flavor characteristics to balance things out. 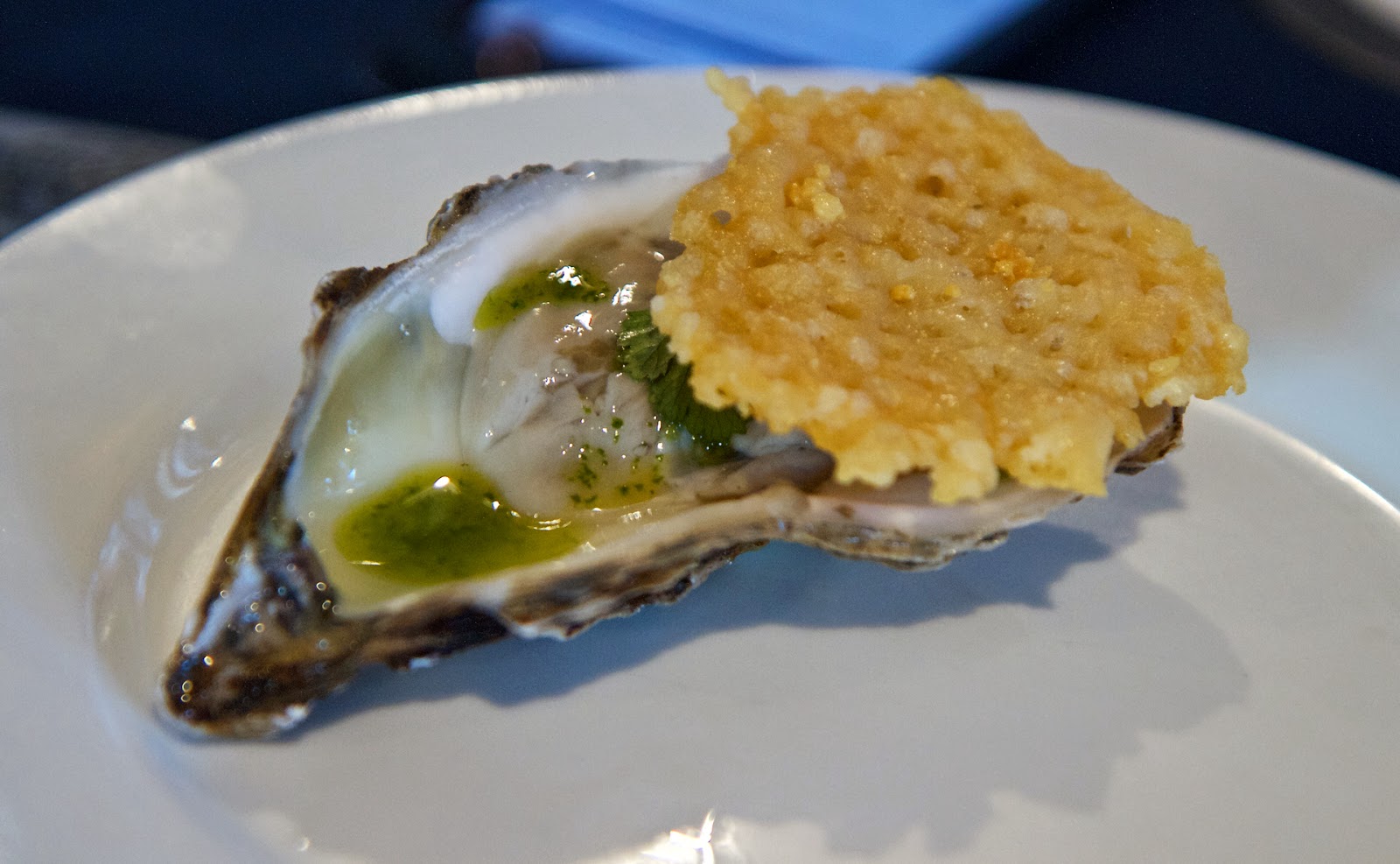 I do not eat oysters. It’s not a taste thing, it’s a texture thing. I know, I know. I should just turn in my “foodie” credentials right now. However, I ate an oyster for Chef Plum. I make sacrifices for friends. This was a nice pairing with a balance of salty to fruity. Nice flavor. Do I now like oysters? No, but at least I gave ’em another try.
Beer: Ghost of All Evil
Food: Seared Local Chicken Thigh with local lettuce fondue with butter and thyme essence 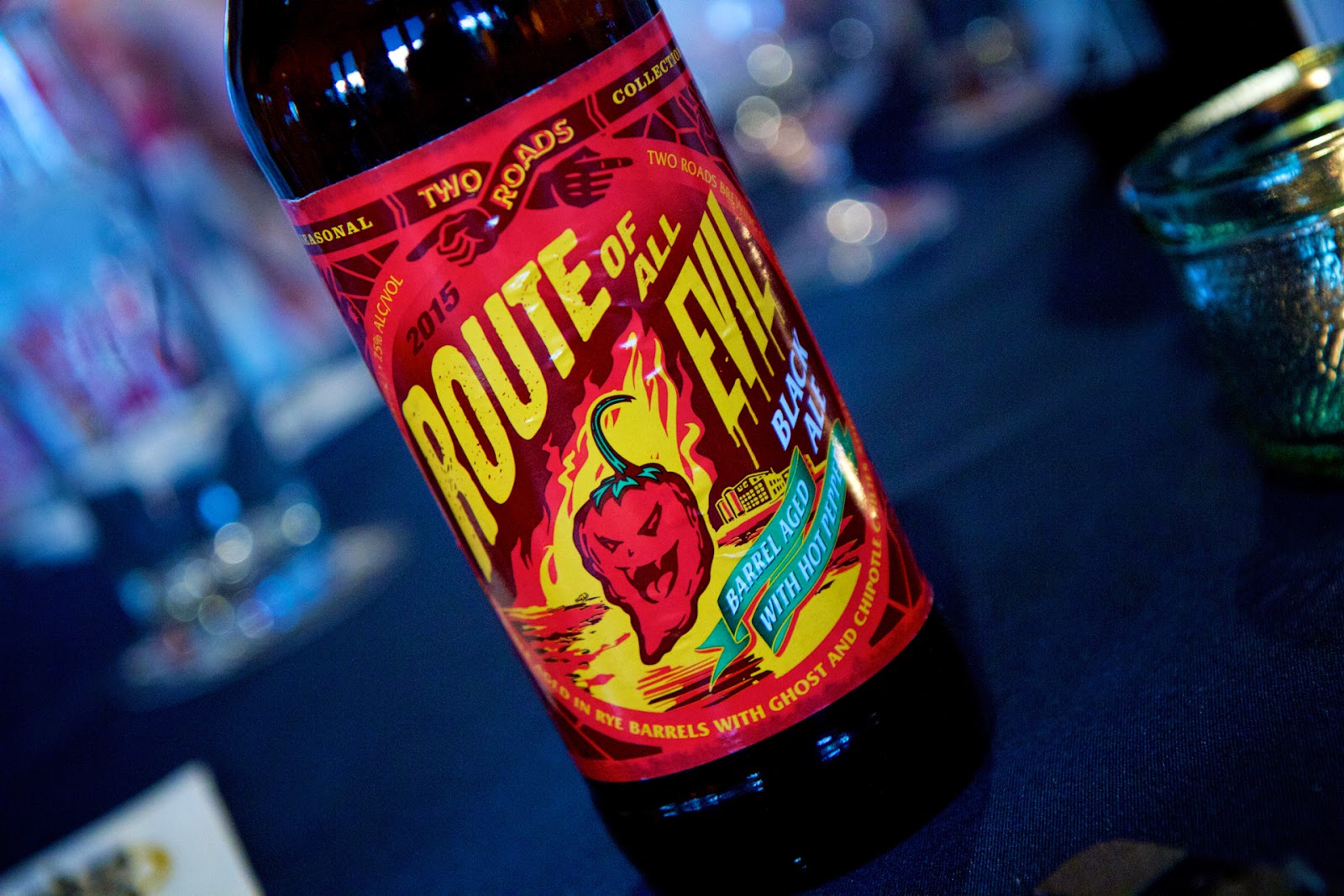 I was very much looking forward to trying this beer. Ghost of All Evil is the Two Roads black ale aged in Willett rye whiskey barrels with chipotle and ghost peppers. It has a dark malt character and a slight hoppiness with a peppery burn in the back of your mouth. It’s not crazy hot, but as the beer warms up the pepperiness becomes more pronounced. It wasn’t over the top and pairs very well with food.
Cooked lettuce is a British thing and in my head I was a little unsure of what it would be like. In fact, it was not bad at all. I mean it was cooked in butter so how wrong could that be? The chicken thigh was a great match for the beer and the lettuce was very buttery providing a background for the other flavors.

Food: Roasted Carrot + Avocado Salad with local ricotta and toasted cumin vinaigrette
This beer is a variation on Road 2 Ruin, a beer I already love. It’s the Road 2 Ruin wort with Trappist ale yeast and brett added to the mix.  It’s an IPA yet with a classic Belgian yeasty flavor. The beer is dry hopped three times with hops grown on premises. But really, this beer is all about the wild yeast. It gives, for lack of a better vocabulary, a barnyard like funkiness. This beer is a home run. I need more. Bring on the hoppy funk. (We liked it so much we forgot to take a photo.)

And yes it was paired with “just a salad” but I have to say the creamy avocado and roasted carrots were a welcome compliment to the beer.

Beer: Aquavit Barrel-Aged Unorthodox
Food: Grilled Flanken with citrus parsnip, charred clementine, ramp puree and sausage
Unorthodox is a Russian Imperial Stout. For this variation, they aged it in aquavit barrels drawing out more woody and spicy botanical flavors. I have to admit that my palate had trouble detecting all the nuances of anise, caraway, and cardamom. Still a good beer and at 9.5% ABV it’s still a party. 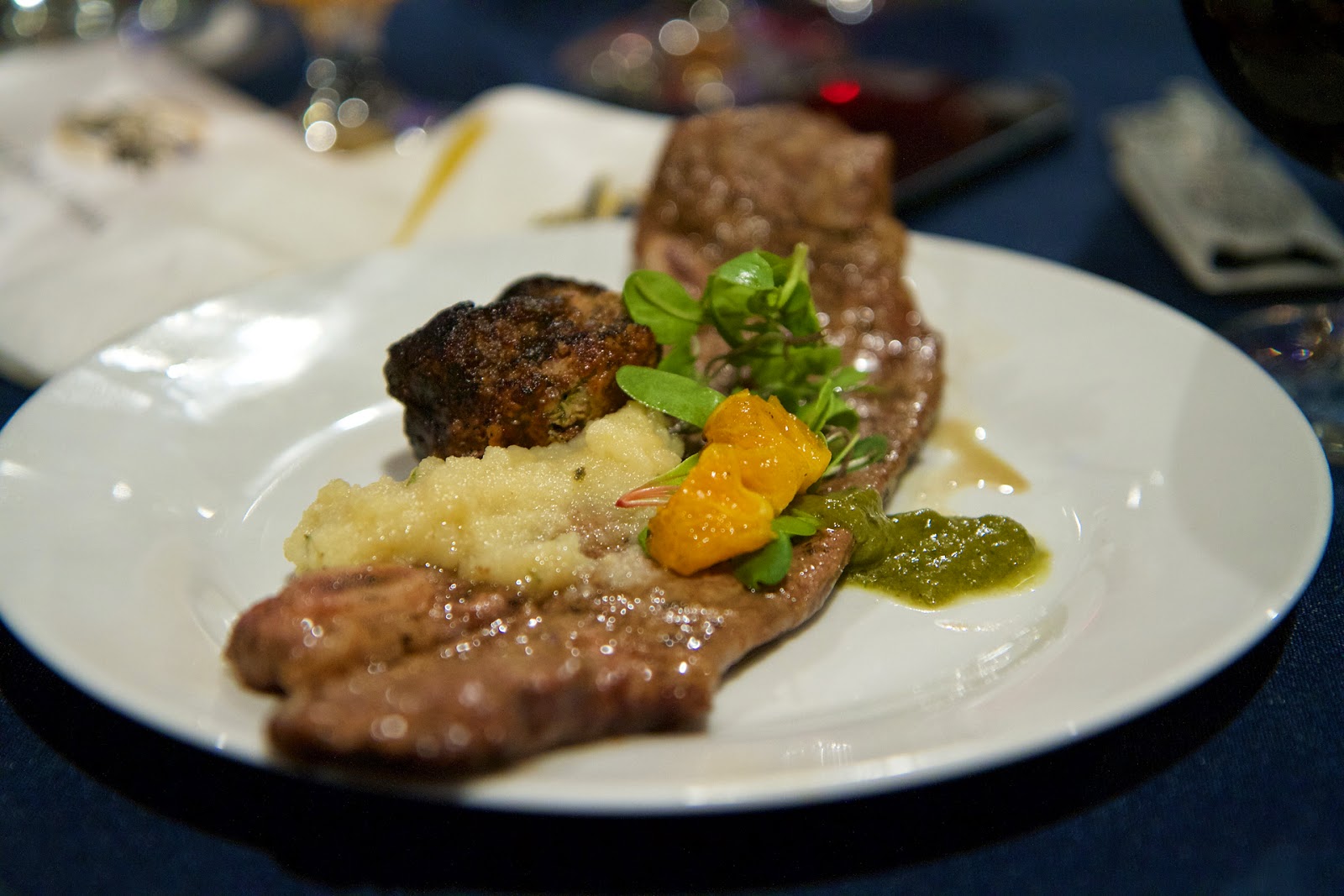 Flanken is a strip of meat from the front end of the short ribs of beef. It’s a tougher cut, so Chef Plum marinated it in Unorthodox. This was my favorite dish of the evening.  The tender meat, the “burnt” sweetness of the clementines, the creaminess of the parsnips and the hint of garlic-onion flavor of the ramps was superbly matched to the beer. 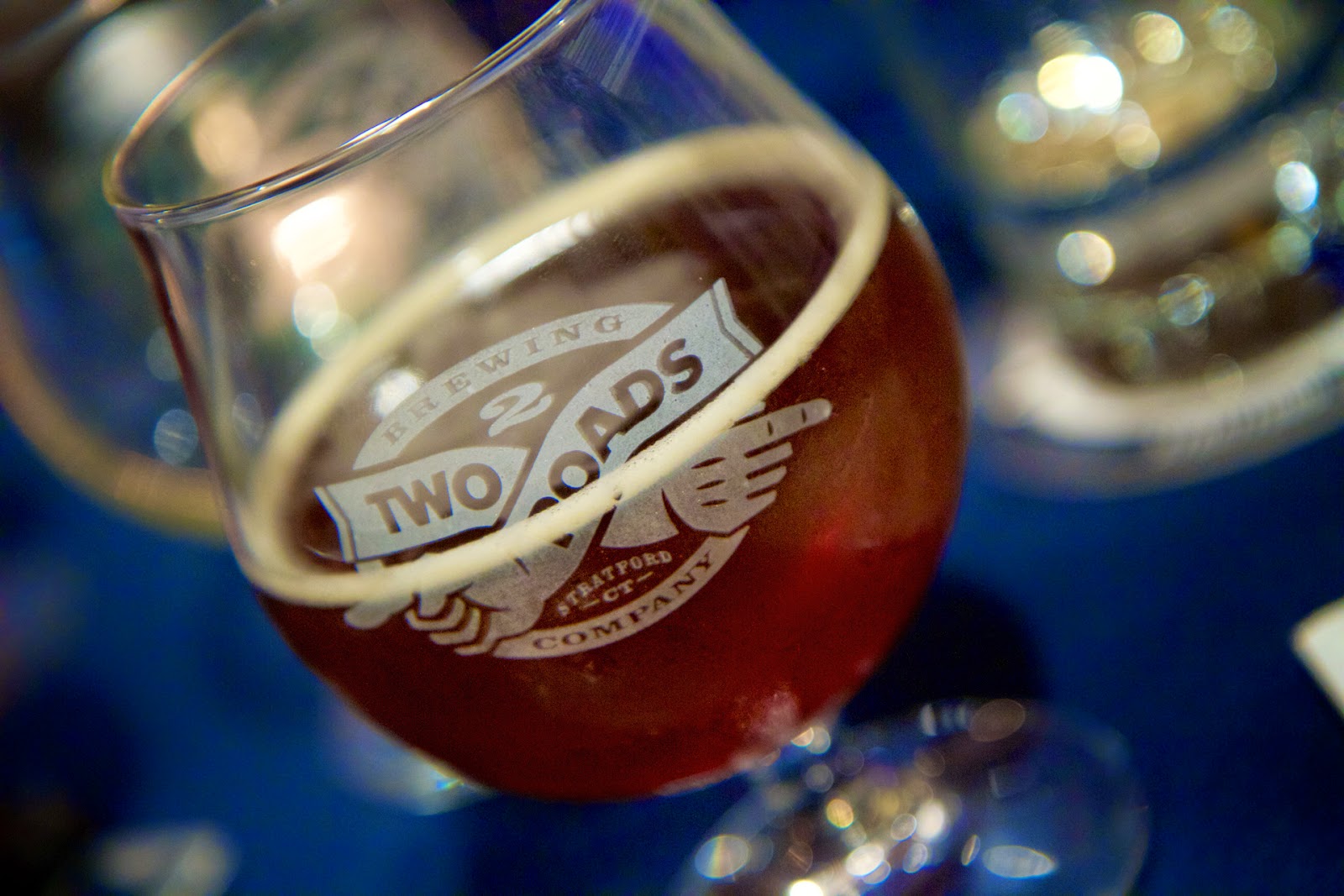 Made every spring,  this is a doppelbock aged in rye whiskey barrels. The flavor starts out oaky, yielding to some caramel sweetness, and finishes with a little bitterness.

Dessert was the right touch of sweet to finish out the meal. The dessert helped draw out the caramel flavor in the beer, yet at the same time, the beer’s woody and slightly bitter notes tempered what could have been a very sweet dessert. Plus, I love that Chef Plum made the maple syrup with his three daughters. A sweet story, and a sweet end to a wonderful tasting experience.

Most of the beers at the Nor’Yeaster event are now only available at the brewery or select restaurants. Do do what you have to do and find ’em, especially that Road 2 Rouen.

For more photos from the evening’s festivities check out our Facebook album.