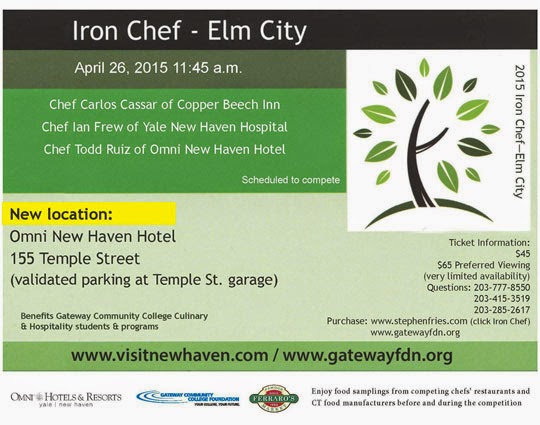 On Sunday, April 26th the competition is going to be fierce in New Haven, as three local chefs go head-to-head in a battle to be named Iron Chef Elm City 2015.

This year’s competitors are Chef Carlos Cassar of Copper Beech Inn, Chef Ian Frew of Yale-New Haven Hospital, and Chef Todd Ruiz of Omni New Haven Hotel. Of course, GCC hospitality and culinary students will be on hand to assist the chefs. Each chef must create an appetizer, entree and dessert using the “secret ingredient,” which won’t be revealed until the start of the competition.

And, what’s a competition without judges. This year’s celebrity judges include Layla Schlack, Associate Editor of Fine Cooking; Dan Brelsford, who was featured as a competitor on Season Three of The Taste on ABC, and food writer Priscilla Martel, former restaurateur and author of two best-selling culinary textbooks: On Cooking and On Baking.

The event opens with a reception that includes tastings from the competing restaurants and once the “secret ingredient is unveiled,” samples by the “secret ingredient” sponsor. Guests will enjoy samples from Gelato Giulana, Deep River Snacks , Willoughby’s Coffee, Kennedy’s Kettle Popped Corn, Holly’s Oatmeal, Sabra Hummus, Katalina’s Bakery,Calabro Cheese, Guilford Spice + Tea Exchange and Orangeside Doughnuts (home of the square doughnuts). There will be raffle for a chance to taste the competing chef’s dishes using this year’s “secret ingredient” as well as a silent auction.

Here are all the details: