Last week Two Roads held a special “Sourcopia” event for the launch of their sour beer series, which became available at the brewery on Saturday. 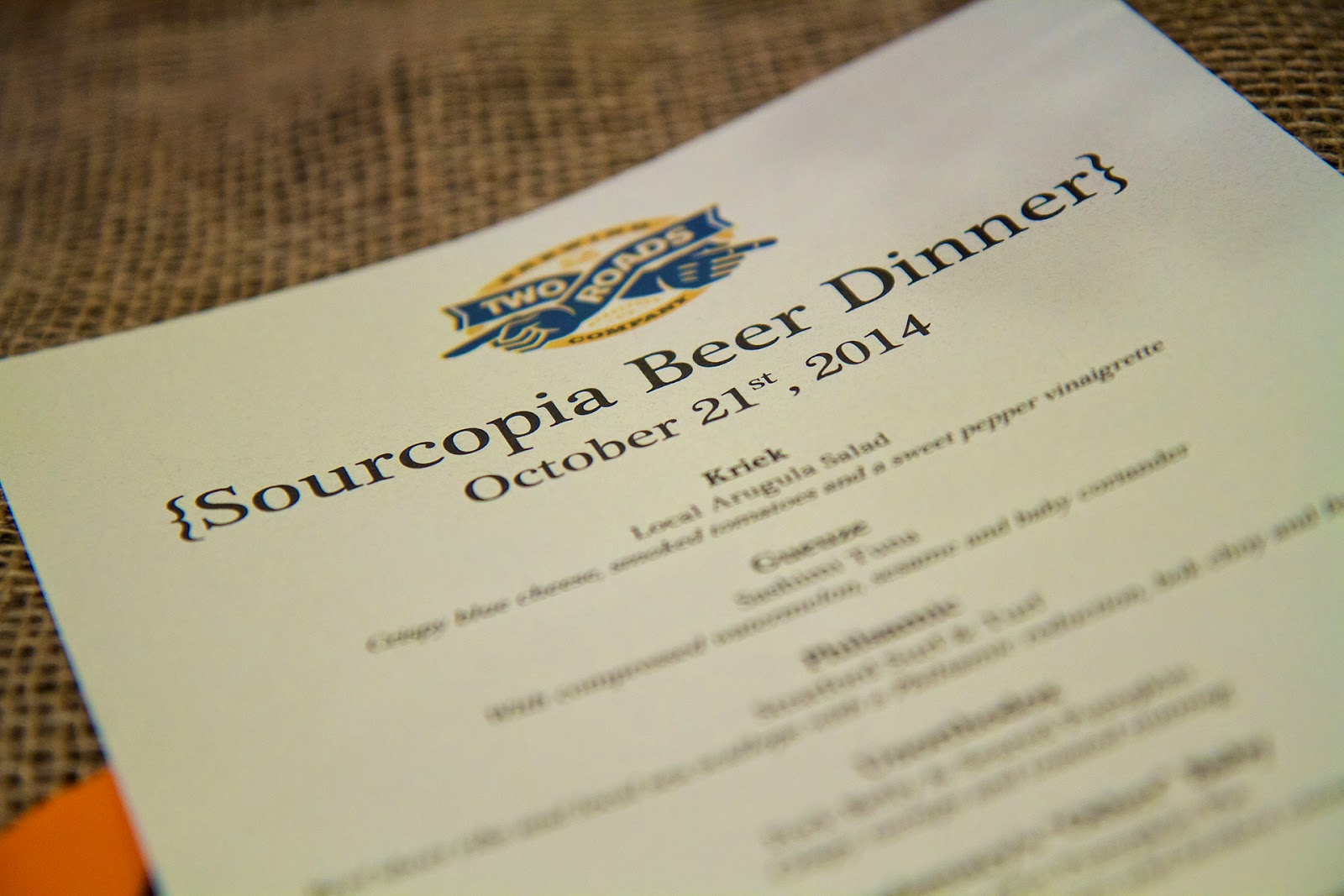 We were there, ready to pucker up and see what these sour creations were all about.

On tap for the evening were three sours beers, Kriek, Gueuze and Philsamic, as well as an imperial stout and a special edition seasonal ale. For each of the five beers, Chef Plum of Plum Luv Foods paired an equally delicious selection of dishes.

It’s important to mention that it was no easy feat for Chef Plum and his team to rock out five courses for 60 people. Why? Well, their “kitchen” for the evening was the space where you normally get your growlers filled at Two Roads. It’s got a fridge, a sink, and some counters.

With great prep, portable burners and a smoker repurposed into an oven, they made it happen. And, the food was spot on. We give big props to Chef Plum, Chef Justin Kern and all the kitchen helpers that night.

Before each course head-brewer Phil Markowski talked about each beer from concept to finished product; then Chef Plum would share how he developed the food pairings for each beer. Check out the course by course pairings below and as always you can check out the photo album on Facebook. 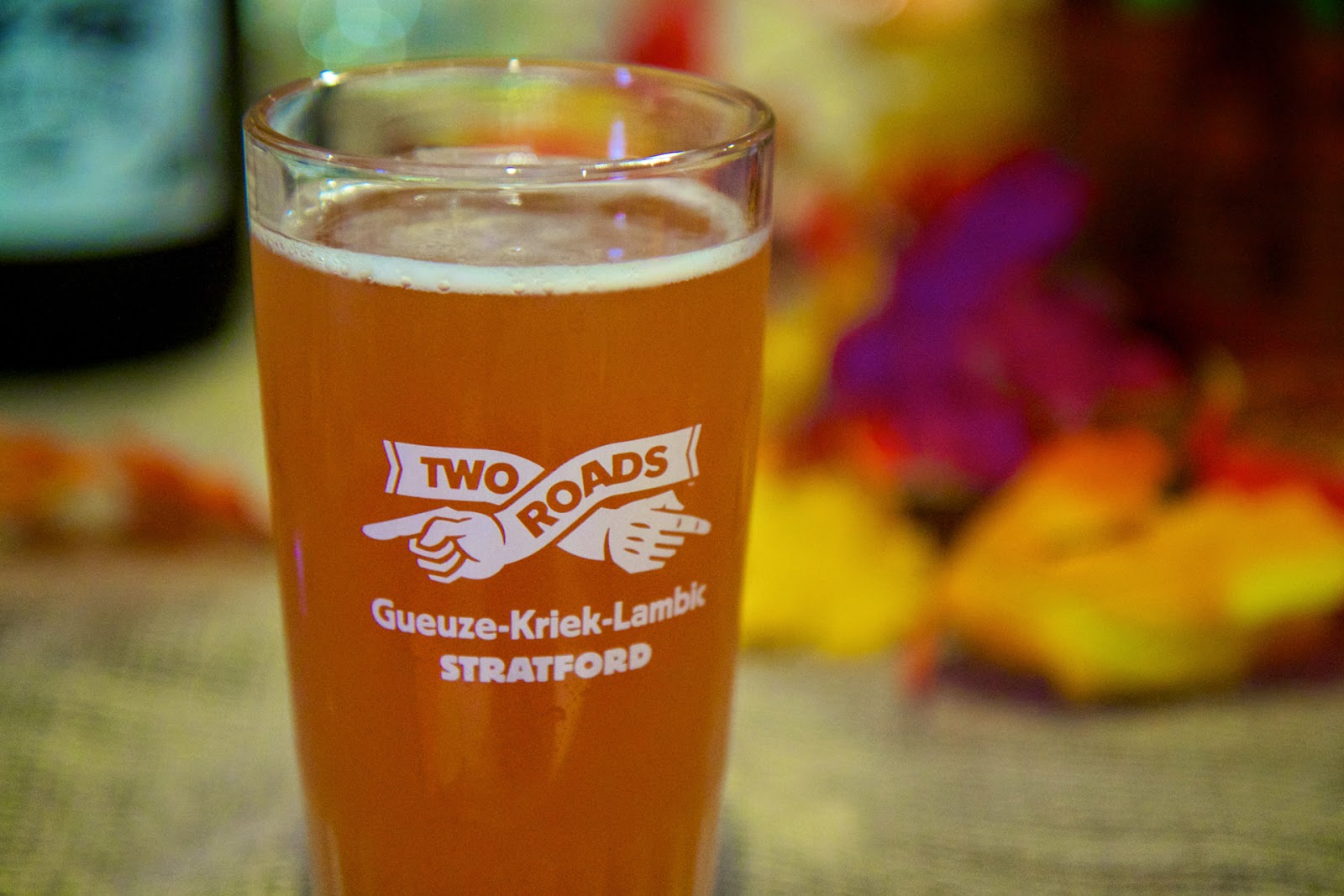 Beer: Kriek
Work began on this sour cherry beer in April 2013 when they picked 300 lbs of sour cherries from a farm in East Haddam, CT. Imagine picking, then pitting 300 lbs of cherries. Needless to say it was labor intensive right from the get go. The beer is soured slowly and was aged in bourbon barrels. 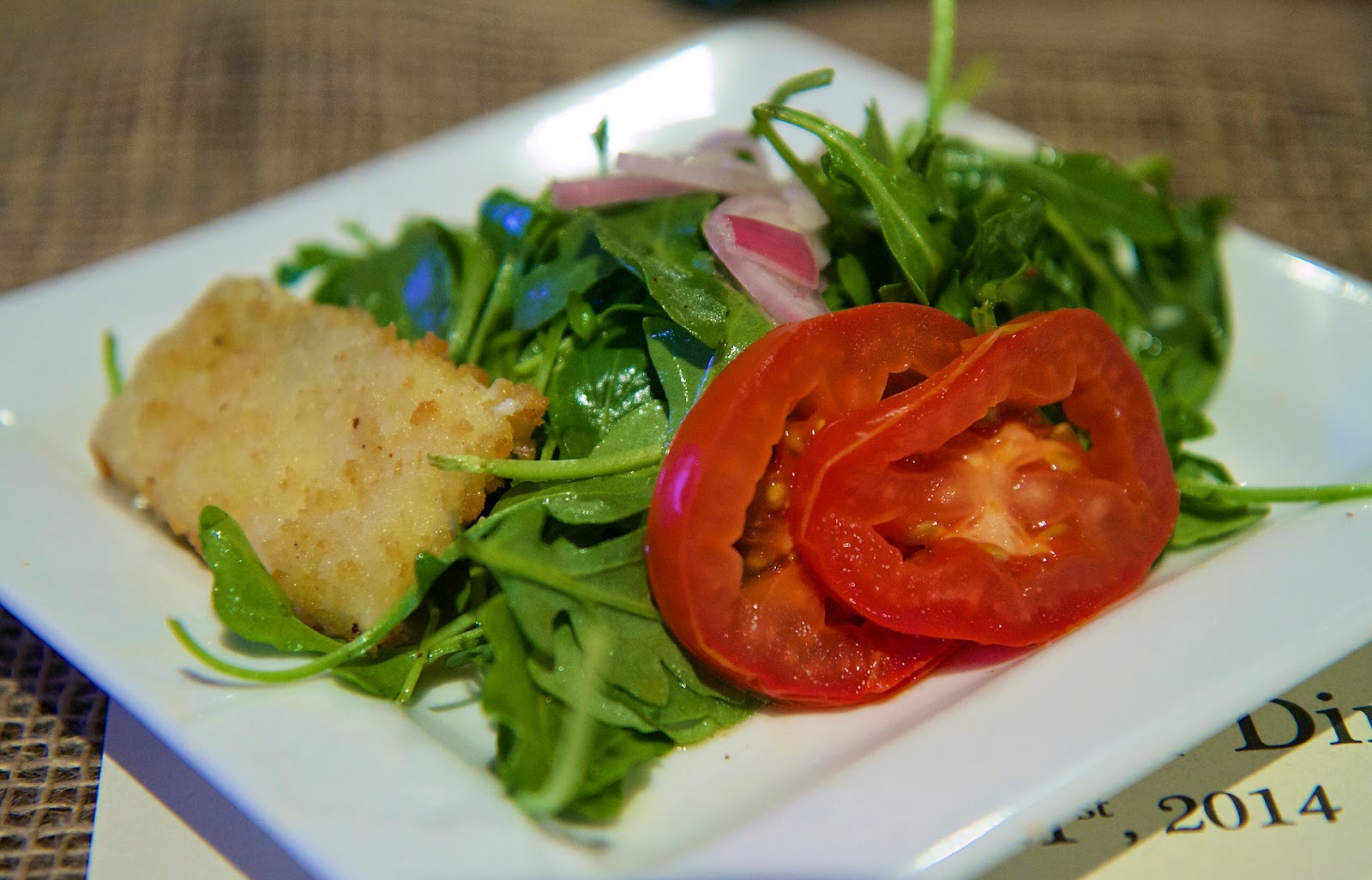 Pairing: Local Arugula Salad with crispy blue cheese, smoked tomatoes and a sweet pepper vinaigrette
This peppery, smokey and creamy salad combination was the perfect way to cut though the sourness of the beer. 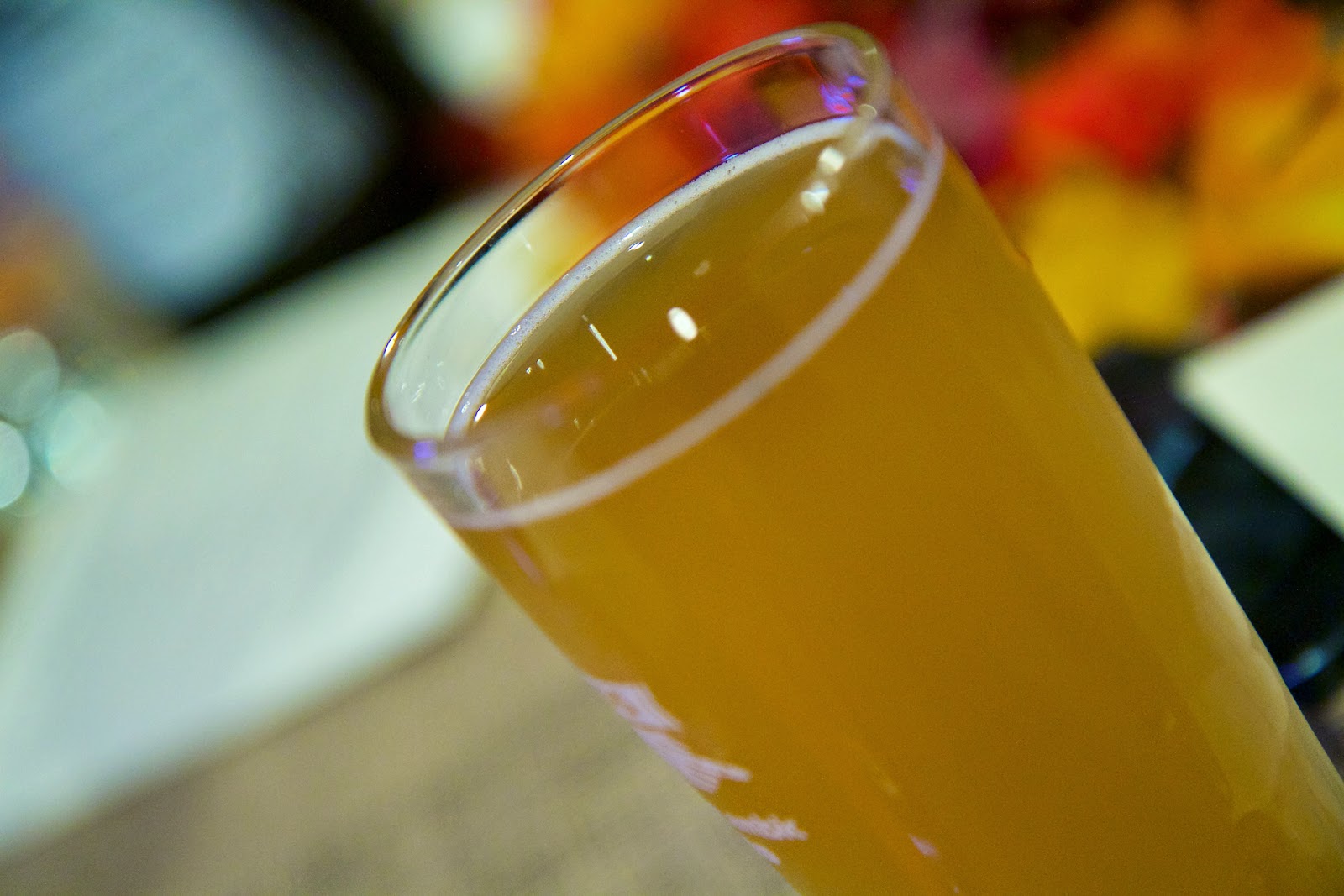 Beer: Gueuze
The beer base was barrel aged 15 months. Honey, from bees located right at the brewery, primed the sugars for refermentation in the bottle. 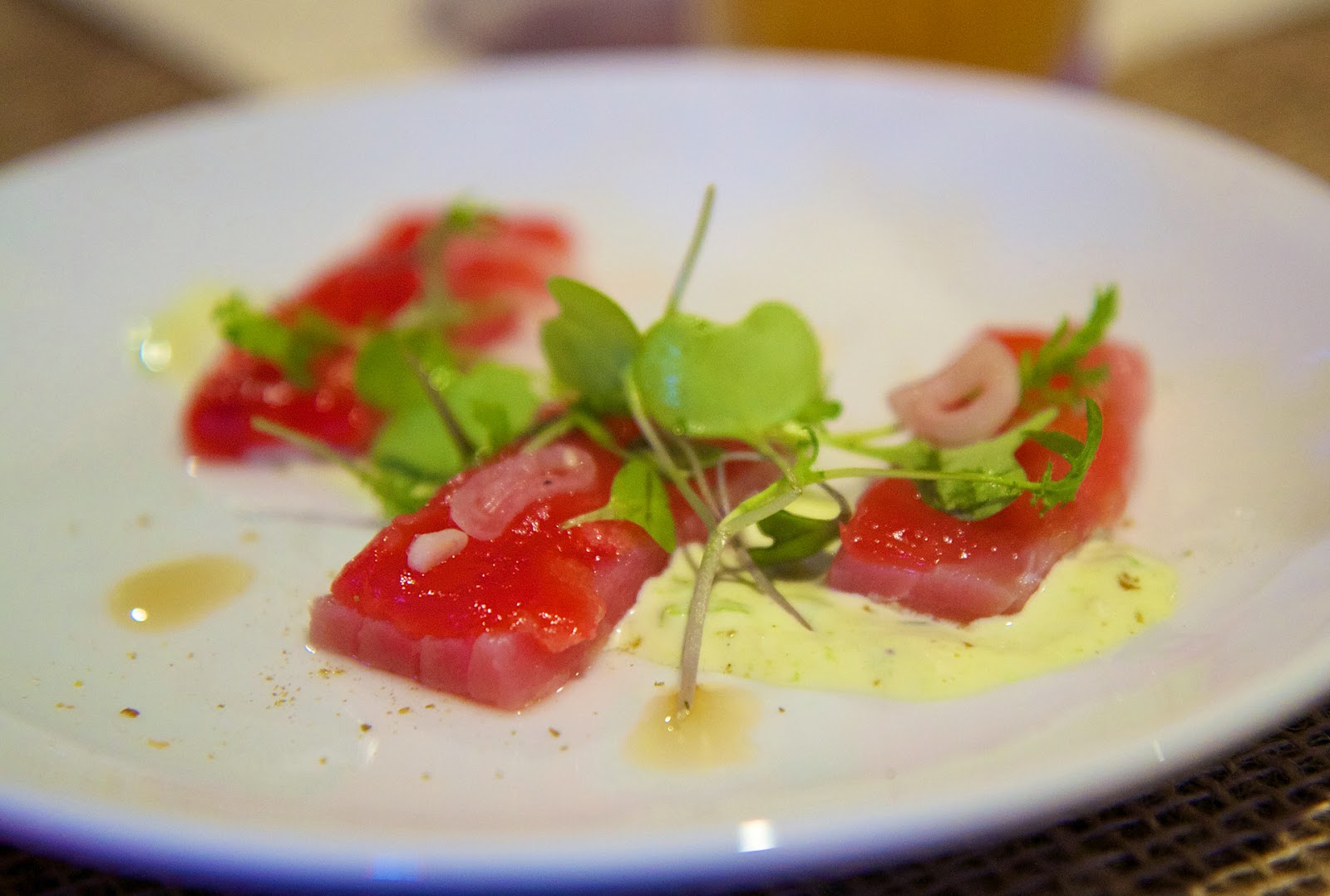 Pairing: Sashimi Tuna with compressed watermelon, sesame and baby coriander
The sesame flavor complimented the fruit notes in the beer. I loved the play of texture and flavor. Fun fact: Chef Plum grew the baby coriander with his three daughters. 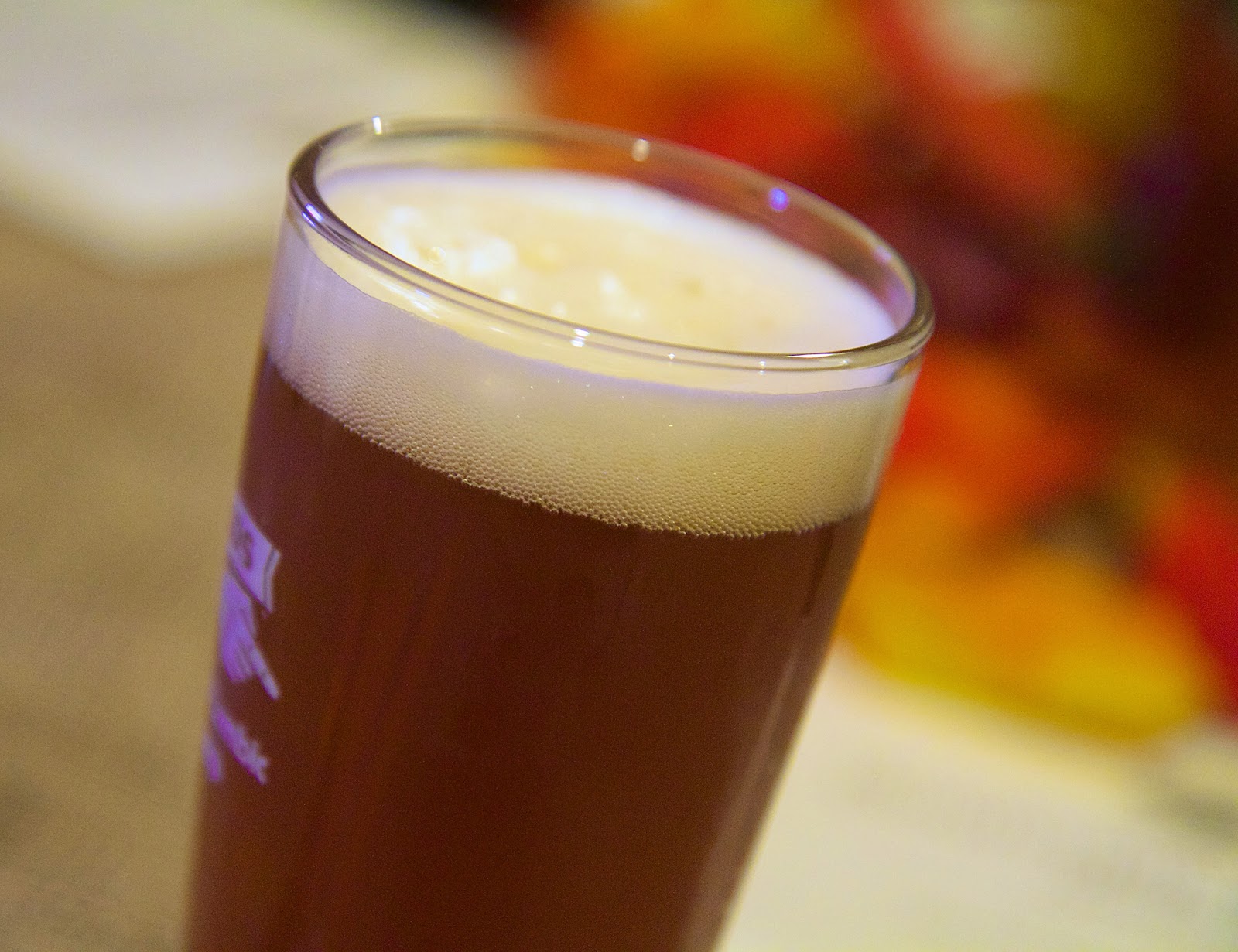 Beer: Philsamic
The origins of this beer go back to 2012. Small amounts of 14 year old balsamic vinegar from Modena Italy were added to the brew over the years. There were definitely berry notes in the aroma and flavor. 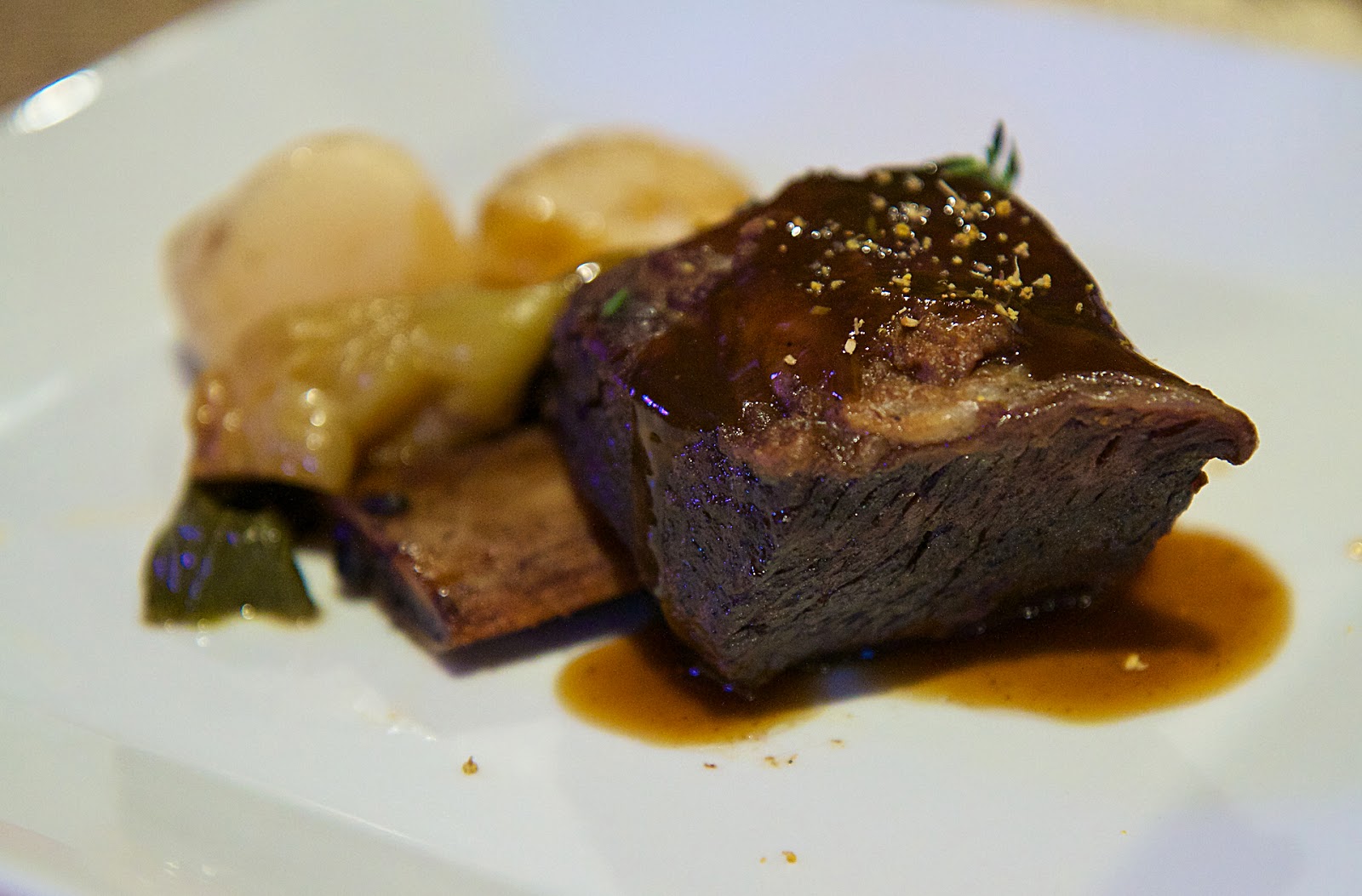 Pairing: Surf + Turf featuring beef short ribs and local sea scallops with a Philsamic reduction, bok choy and fennel pollen
The scallops for this dish were harvested just that morning in Stonington, CT. They offered a fresh out of the sea saltiness to the weightier beef short rib. The hint of licorice flavor from the fennel pollen complimented the beer. 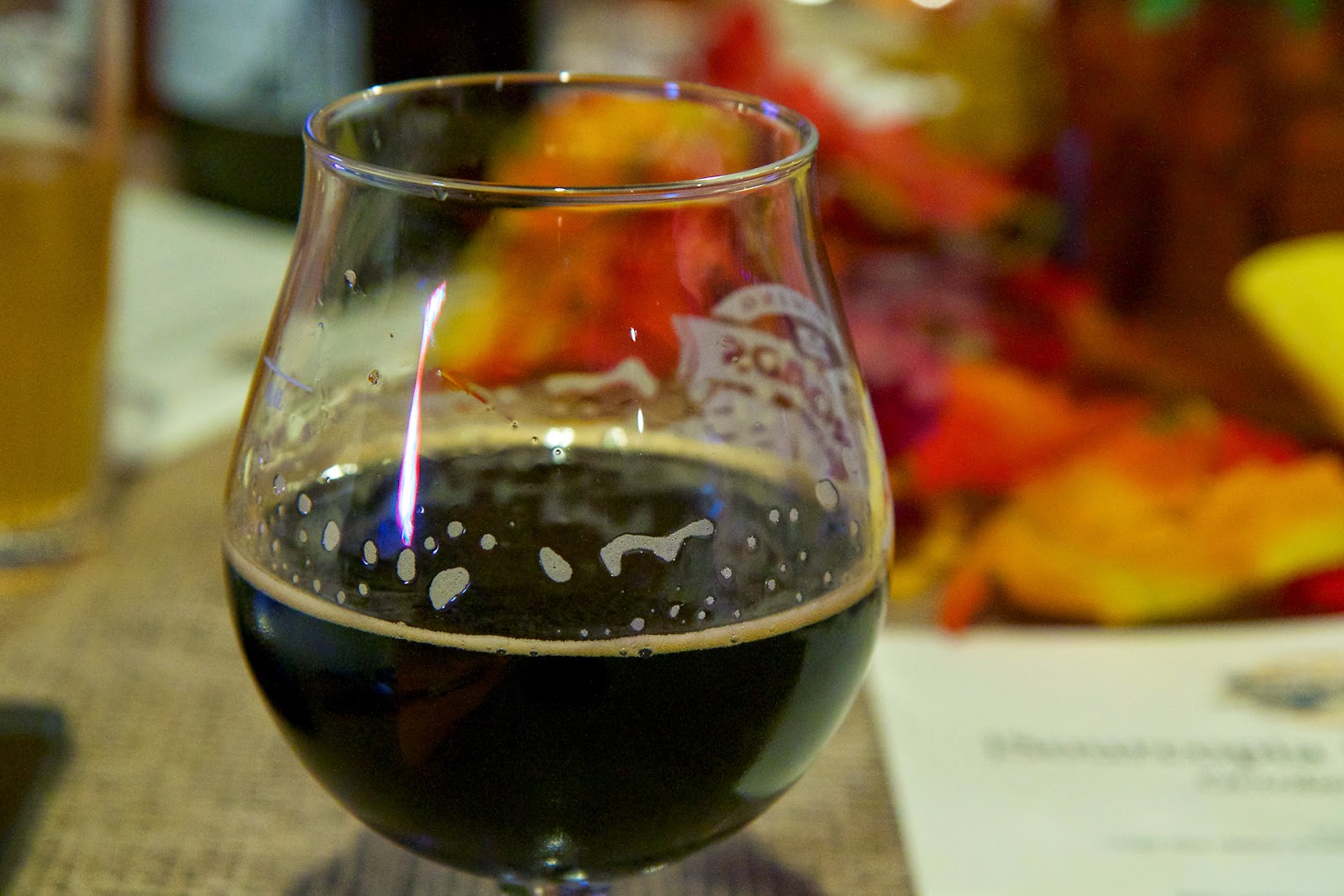 Beer: Unorthodox
Moving away from the sour beers, this is a Russian Imperial stout. Made with rye malt and “aggressively hopped” it has a moderate 9.2% ABV. 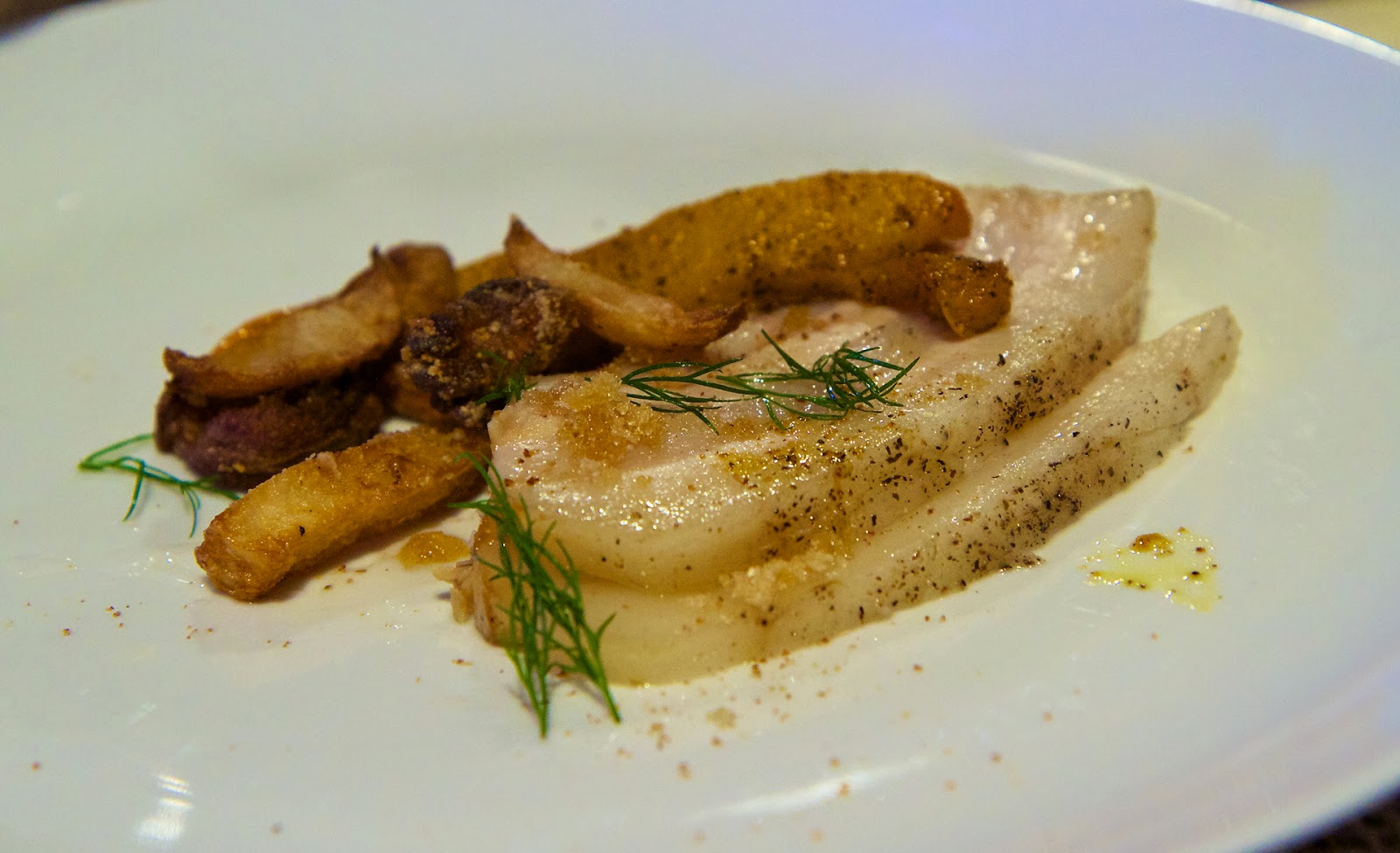 Pairing: Pork Belly + Seared Pumpkin with crispy turnips and toasted nutmeg
Whenever you are at a dinner created by Chef Plum you an count on having pork belly. Chef Plum readily admits he has an “unhealthy obsession with pork belly.” No doubt that Renato and I do too. This dish mirrored the hearty stout flavors. It was big and bold and not surprising, one of my favorite parings of the night. 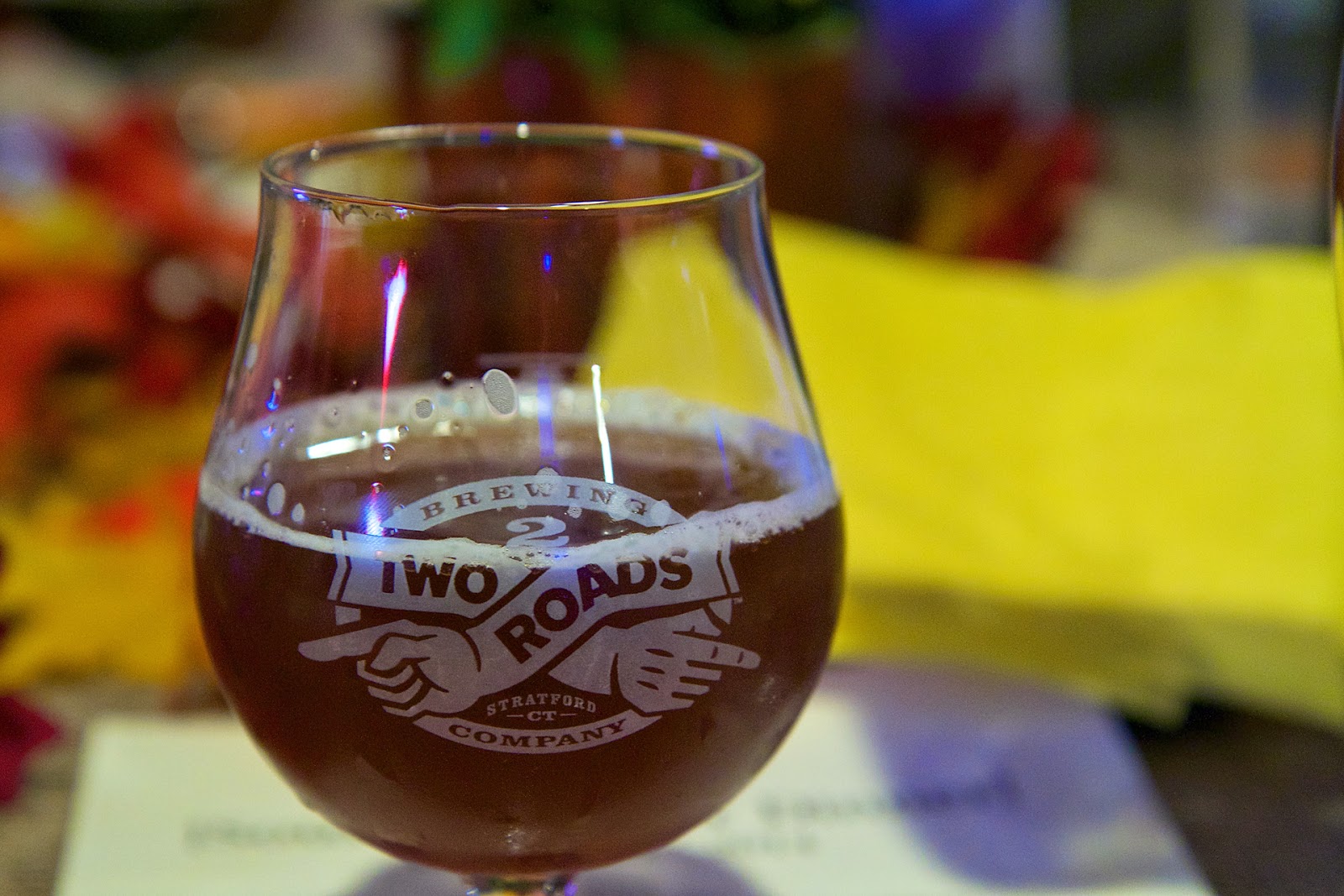 Beer: Roadsmary’s “Other” Baby
This is a pumpkin ale that’s then aged in rum barrels. I enjoy the original Two Roads Roadsmary’s Baby but this is even better. It will be available only in limited quantities. 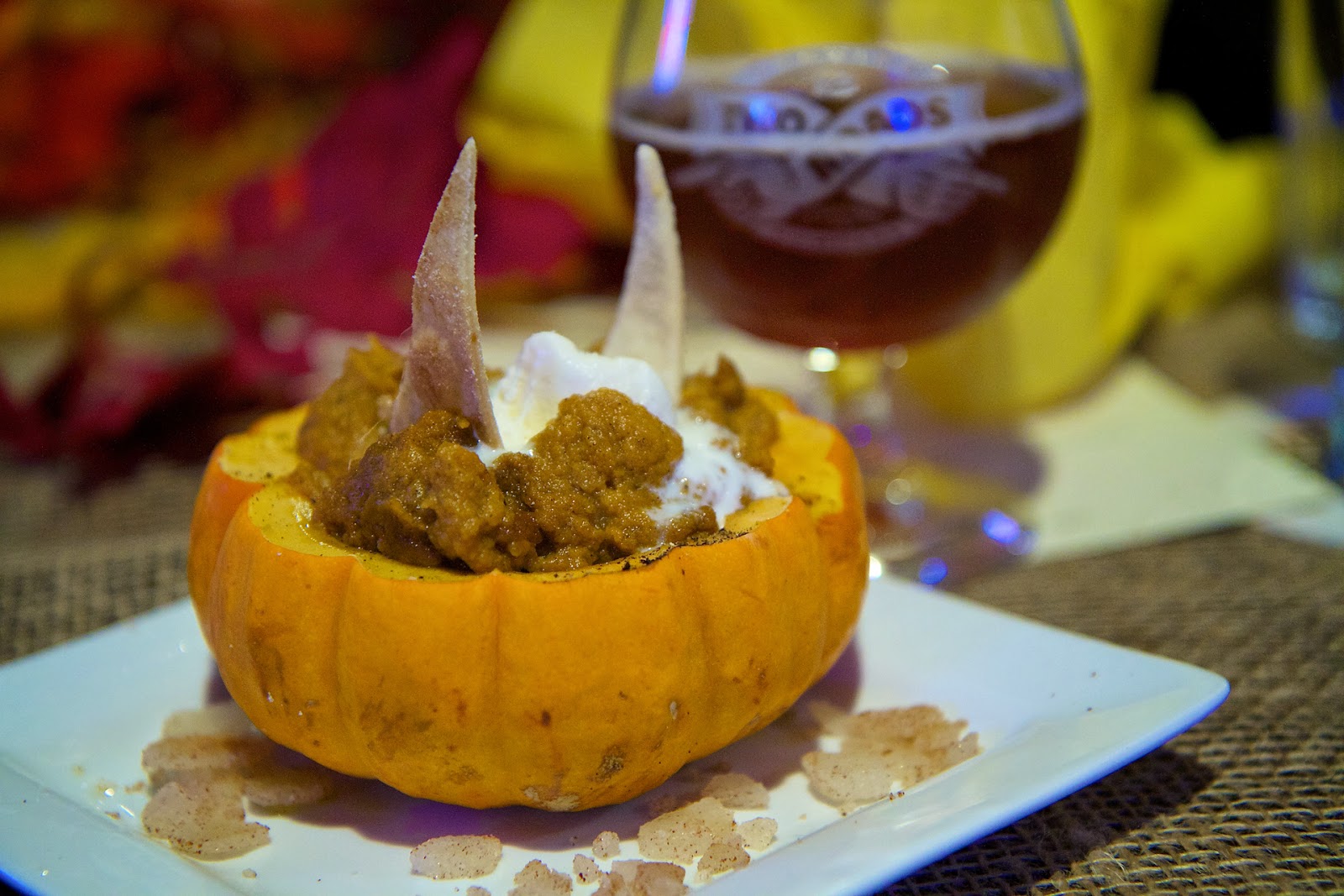 Pairing: Inside Out Pumpkin Pie with smoked vanilla bean ice cream and broken cinnamon sugar
First of all, this dessert was adorable. Served in mini pumpkins the filling was creamy and the shards of pie crust were perfectly flaky. The smoked vanilla been ice cream was a wonderful match for the beer’s rum flavors.

Two Roads brews some good beer, but these brews were stand-outs. I highly recommend getting down to the brewery and having one (or two) on tap.