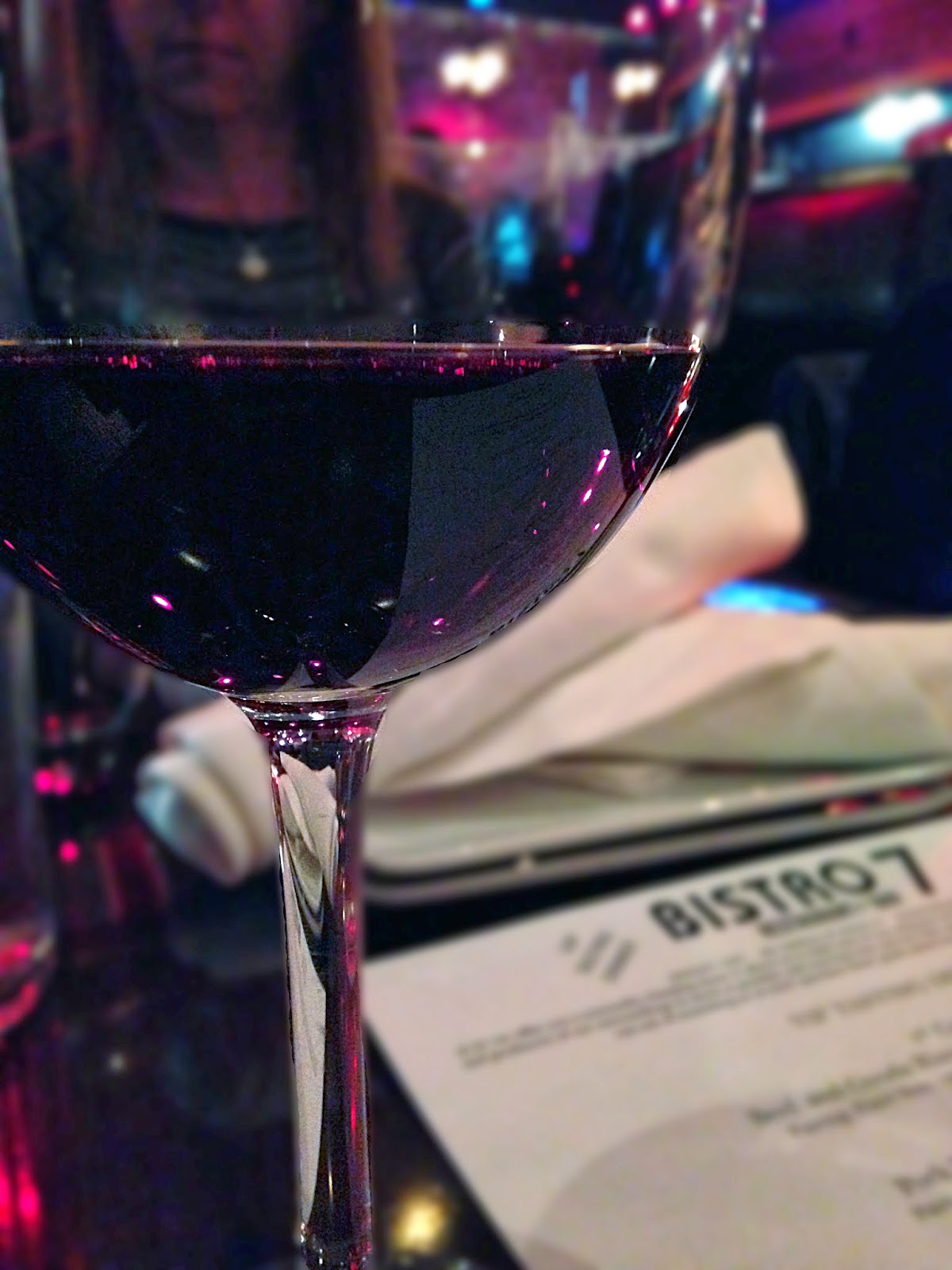 It’s hard to believe, but sometimes Renato and I aren’t together. Shocker, I know. Recently while he was away on business, I decided to throw on my party shoes, grab a friend and head to a VIP tasting dinner at Bistro 7 in Wilton.

My friend Stephanie is not a food blogger, but she sure acts like one. I mean she already takes photos of her food and shares ’em all over Facebook! She was the perfect person to bring to dinner and I even asked her to write about it.
So, without further adieu, here is her first official food blogger recap!
A Taste of Bistro 7 in Wilton
by Stephanie Wanzer

Bistro 7 Restaurant + Bar in Wilton has paired adventurous small plates with appealing cocktails. The atmosphere of the restaurant, with its warm and gracious servers, made for an evening of unexpected delight. Their philosophy is farm to fork with an essence of sophistication and creativity. And creativity they have!

Pairings such as the Beef and Gouda Risotto Ball, Lentil Soup, and an over the top layered Butterscotch Pudding were delicious set to organic wines, beers, and cocktails from fresh juices and fruits. Owner Breno Donatti carefully selects the wines he serves in his trendy restaurant.

As I was served the Monte de Luz Syrah from Uruguay, our waiter commented, “It’s not like a regular Syrah, it has sweetness to it”. This flavorful wine combined with the Pork Meatball Skewer and pickled pearl onion demonstrates the appealing accoutrement that make the dish so different and innovative.

Seafood plates were a Scallop and Shrimp Ceviche and a Pan-seared Swordfish. Not only gluten free, their accompaniments of fresh produce such as red onion, mango and lime made these tender bites of fish, melt in your mouth. The kicked up Jalapeno Margarita would have been perfect with either of these plates. The addition of spicy jalapeno and fresh juice made this margarita a wonderful change to the lighter version I usually prefer.
Channeling a more sophisticated form of the average barbecue, both the Duck Prosciutto Slider with whole grain honey mustard and the Pulled Pork Chimichurri over sweet plantains were inventive takes on game day food. Add to that,  local craft beer from Two Roads Workers Comp Saison Ale and Saranac Prism White Ale with its subtle pear undertones, and you have a hip alternative when watching the UConn basketball game.
From the first bite I fell in love with the hearty, peppery warmth of the lentil soup. Fresh soups are a staple here at Bistro 7 and I have to agree that they are a strong go to if you are looking for American comfort food. What doesn’t taste good with bacon in it is my motto, and this soup’s natural heat warmed me on a cold night.
I have to be honest; I am not a lover of dessert. I can take it or leave it. But in the case of our final course the Butterscotch Pudding with chocolate coffee swirl, I ate the entire thing! The butterscotch was layered in complexities that merged dark chocolate sweetness, coffee undertones, fresh whipped cream and cradled in a soft graham cracker nest. Last but not least was the cocktail that complemented this decadent dessert. The Branded Arrow cocktail in itself was a sweet course made from Makers Mark, macadamia syrup, cayenne and fresh orange juice.

In its entirety, I enjoyed the knowledgeable owner who has a vision of healthy and comforting foods in an atmosphere that caters to families as well as the couples scene.