For lots of reasons there are certain cities in Connecticut that have a serious image problem. Bridgeport is one of those places. Come on, we’ve all made a funny face when someone says they’re going to Bridgeport.

Well, entrepreneurs in Bridgeport are trying to change the city’s rep. Spots like The Bijou Theatre offer movies, arts and culture and just around the corner is Barnum Publick House offering modern pub faire in a casual atmosphere. Right around the corner from that, is a successful weekly farmer’s market. Now, you can add a new eatery to the mix – Bistro B.

Background
Bistro B is brought to you by the duo of restaurateur/real estate developer Steve Montello and executive chef/owner Jason Milanese. The duo just also happens to be behind Barnum Publick House, which also just so happens to be adjacent to Bistro B.

Chef Jason said that “Bridgeport is a place people don’t think about to find this kind of food” and that the city has “just as much potential as any place else in the country.” If these two eateries are any indication of the city’s potential, then we can’t wait to see more. 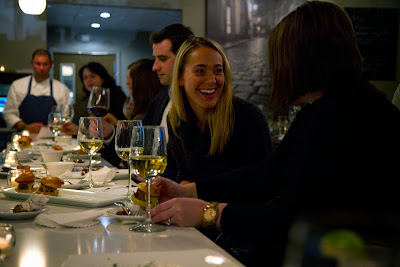 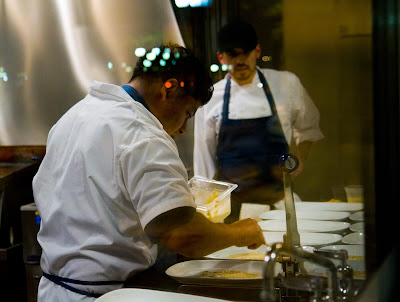 The Menu
The menu reflects a French-American fusion featuring items like classic escargot with garlic herb butter and hangar steak with pomme fries to American southern style fried chicken. The menu is broken down by “Plates”: garden, small, table, daily and large. 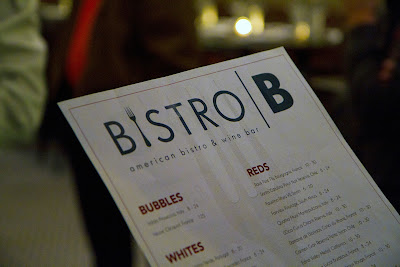 Drinks
There is a small bottled beer selection and craft cocktail menu. But, really, it’s all about the wine. It’s predominantly French focused including Alsatian varietals, Bordeaux and Cotes du Rhone. Okay, I have no idea what all that means. I copied from their website. Note to self: Learn about wine, drink more wine.

We started off with three small plates. 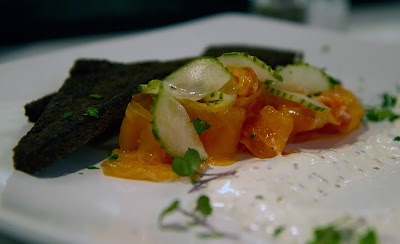 House-cured Salmon with star anise pickles, horseradish mustard crème and brown bread. The salmon was cured with salt and a touch of sugar. It was a very refreshing starter. 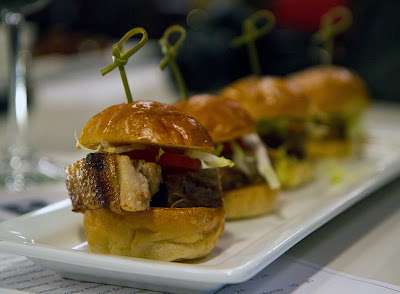 BLT sliders with braised pork belly, Roma tomato, iceberg lettuce and maple aioli. As you would expect, I was excited for the sliders. I mean, hello, pork belly. The touch of sweetness from the maple aioli helped temper the fattiness of the pork. I had to refrain from having more than one. No, really. 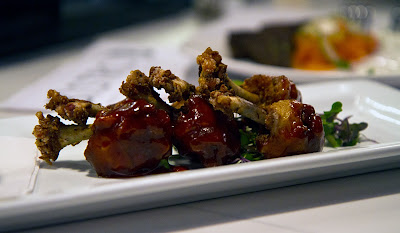 Chicken “Lollipops” with house-made BBQ Glaze and blue cheese dressing. The chicken lollipops were good, but for me, the BBQ sauce was a little too overpowering. Renato disagrees. 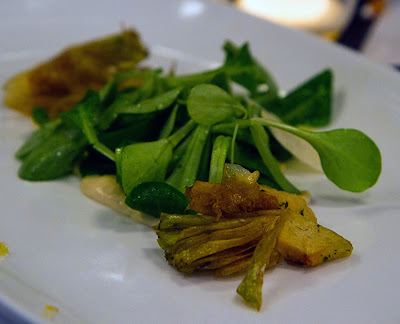 Next was the garden plate, a Lambs Lettuce salad featuring crispy artichokes and roasted garlic hummus. The lettuce was wonderfully tender and light making a nice match for the crispy artichoke hearts and garlic pop from the hummus. I really enjoyed this salad. It seems so simple, but the flavors are a great combination.

With our salad, we sipped a Savignon Blanc from New Zealand. I am not much of a white wine drinker, but this choice was lovely. It had citrus notes and crisp flavor. It really seemed to accent the salad rather than overpower it. Thank you to fellow blogger Anatoli Levine (aka Talk-A-Vino) for the recommendation. 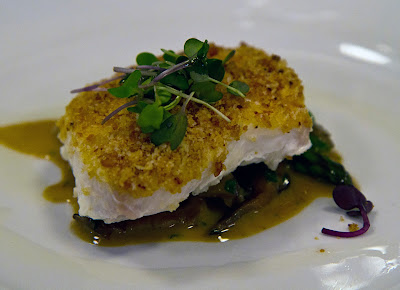 Potato and Onion Encrusted Halibut with forest mushroom ragout, asparagus tips and truffle. As expected this dish was not for me due to my anti-mushroom/fungus stance. So in this case I defer to my better half. Renato said the beefy tasting mushrooms provided an interesting balance to the lighter, more delicate fish. He ate it all so I think that says it all. 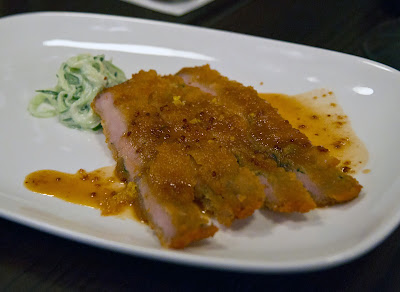 Pork Schnitzel with cucumber salad and mustard honey pan roast. The thin pork cutlet wasn’t overly breaded. This dish was well balanced between the light crunch of the cutlet, the play of the tangy-sweet pan gravy and the fresh burst of the cucumber salad.

At this point we switched to a red wine – Carmen Gran Reserva Petite Sirah. Wow, did it pair perfectly with the next dish. When you choose a wine that just happens to pair well with food it’s magical. Anatoli hit it out of the park on this choice. 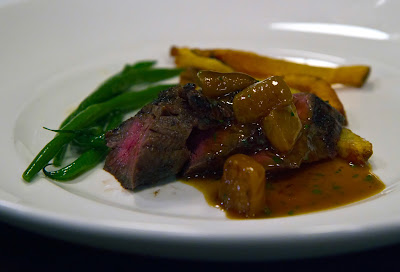 Roasted Hangar Steak with pomme frites and roasted pears. I judge a bistro based on this dish. It’s classic comfort food and this version of steak frites didn’t disappoint. The steak was cooked exactly how I like it – on the rare side. The roasted pears were a fantastic twist. Again, it was a perfect balance of sweet and savory. I highly recommend this dish! 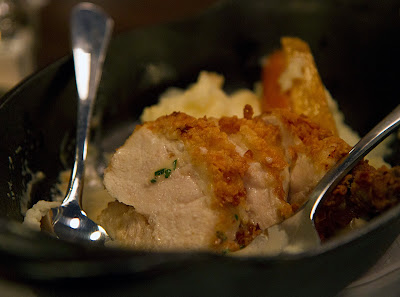 Last but not least was the Chicken Fried Chicken with crispy Amish chicken breast, black pepper gravy and cinnamon spiced baby carrots. The chicken was juicy and tender. Yes, this is fried chicken but there wasn’t heaviness to the fry to weigh down the flavors. This is another elevated comfort food. To my delight, the baby carrots were actual baby carrots not those weird pressed together nubs you see at the supermarket. 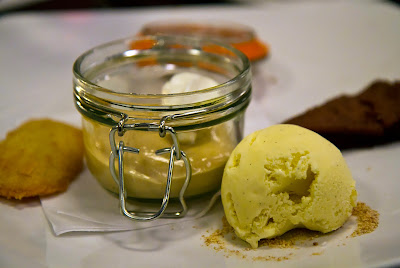 After all that food, it’s hard to believe I still had room for dessert. Boy, am I glad I did. Along with French press coffee we were presented with Butterscotch Pudding with almond madeline and a Flourless Chocolate Cake with vanilla ice cream. All the desserts are made in house. The chocolate cake was good, but I was bowled over by the pudding. I love butterscotch pudding and it’s not something I see on menus all that much. It was creamy and sweet with a hint of salty. O.M.G.

Bistro B is a welcome gem to the burgeoning revitalization of Bridgeport. So quit makin’ a face and just come to Bridgeport for a great meal.

Disclaimer: I was not compensated for this post. This tasting meal was free of charge. The opinions contained herein are my own and reflect my experience. Your own may differ.