Here’s a piece of advice – always travel in the company of a chef. They not only know good places to eat, but it’s even better when they know the chef where you are dining. You see, an impromptu stop at Redding Roadhouse with Chef Matt Stanczyk of Stanziato’s Wood Fired Pizza turned into a lunch so amazing we just had to write about it. Chefs know how to treat fellow chefs and this was over the top awesome.

A little info on the Redding Roadhouse: In the summer, I think, of 2012 Ted Stonbely, his wife Colleen Cook, her brother Chef Wirt Cook and his wife Karen took over the place. The menu was paired down and quality level brought up. It’s still comfort food, just with a modern take. They make an effort to support local farmers and fisherman when possible and craft the menu to reflect what’s seasonally available. Many of his vegetables come from Holbrook Farm in Bethel and Gilbertie’s Herb Garden in Easton has two beds dedicated to growing for the restaurant.

Side note: Chef Cook was Alex Guarnaschelli’s sous-chef on this season’s Iron Chef America. They won.

It may have been a little before 12noon, but it was a Friday, so why not start out with a beer. There was a nice selection of both draft and bottled beers. We were going to peruse the menu for a small nosh, but then, we were informed they would just bring a few things out for us. Yeah, that’s pretty rock ‘n roll. 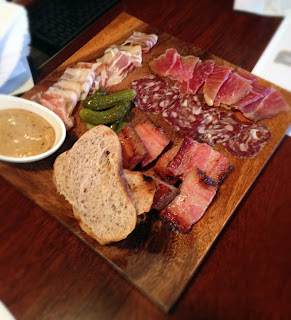 First up was a delightful assortment of charcuterie with housemade mustard, cornichons and grilled bread. The meats are cured in-house. Of note was the crispy, melty thick chunks of bacon, wild boar sausage and tender, tender lardo. 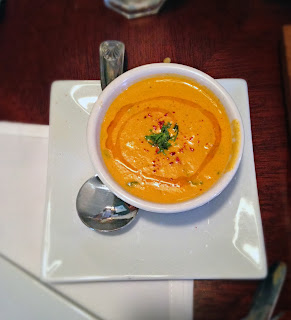 This array of cured meats was all I needed to be content, but then came a bowl of tomato soup with fresh corn kernels topped with lobster oil. The fresh crunch of the corn kernels was a nice contrast to the silky soup. I didn’t see this on the usual menu so it may have been a special that day. Whatever it was, it was delicious.

Next were crab cakes with a zesty tartar sauce. They were exactly how a great crab cake should be – crispy with lots of crabmeat. 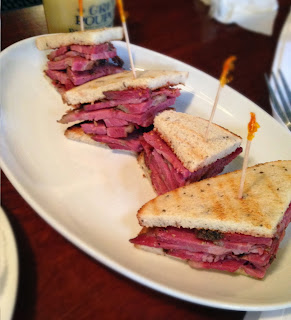 Just when we thought we’d head on out … a bevy of sandwiches appeared before us. House made pastrami on rye, a cuban sandwich, and a trio of mini lobster rolls topped with fish roe. Plus, as sides we had the fish slaw and red cabbage slaw. The pastrami sandwich was loaded with thick cut flavorful meat. As I’ve gotten older I’ve taken a shine to pastrami so this was a perfect choice. 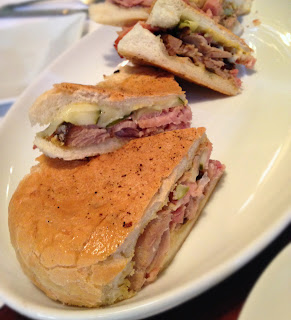 The cuban was filled with house smoked pork and ham, melty gruyere cheese and house made pickles. It was salty, cheesy, porky goodness. 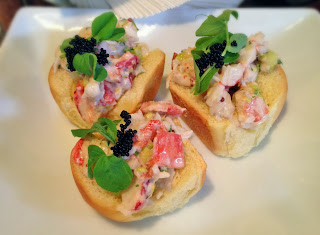 I’m not a fish roe fan. It’s a powerful flavor. Much to my surprise, the fish roe on the mini lobster rolls didn’t overpower the taste at all. 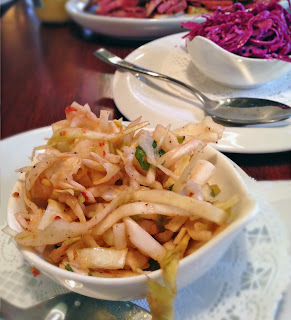 Both slaws were crunchy and flavorful. Although I admit the fish slaw, which tasted like a fresh kimchi, was my favorite.

And what meal is complete without a little sweet? How about some fresh out of the oven chocolate chip cookies? As soon as the bartender saw the dessert she popped open a bottle of chocolate stout to pair with the sweet bites. What an amazing combo! Now, if only I could remember the brand of that beer.

So an hour and a half later we walked out of the Redding Roadhouse with full bellies and a serious desire for a nap. Now that’s how to have a Friday.

Thanks for hanging with us Matt and a seriously HUGE thank you to the amazing team at the Redding Roadhouse for going above and beyond. The moral of this story: Always dine with a chef … and go to Redding Roadhouse.