Sure, I could go on and on with my grievances during the power outage. I certainly did my fair share of complaining while sitting in my dark, cold house. However, I won’t. Instead I want to a share a few of the simple things this slap in the face made me appreciate.

My outage superstars: Propane range, a fireplace that burns actual wood. They made life a bit more bearable. We worked with what we had and that was more than lots of our fellow Connecticut friends. I was able to cook on my stove and keep warm by the fire.

I also am really glad that without realizing it I was stocked up on local produce that was meant to last – winter squashes, potatoes, onions, garlic …. you get the idea. These are all things that store well with no refrigeration required.

You know, in a crazy way, I was looking forward to the challenge of cooking during the outage. In general whatever meal of the day it was, we kept it really simple. I tried to stick with one pan meals to make washing up a bit easier. I made quinoa porridge with local Cortland apples. We ate leftover ginger molasses cake and defrosted homemade zucchini bread.  And, there was always beer to sip by the fire. I did make a few quick dives into the fridge for milk. I figured we should use it before it spoiled. When we did run out of milk, we sweetened our coffee with maple syrup (something we do relatively often any way). 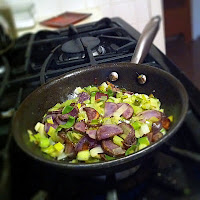 One dish I’m sure to make again is sauteed leeks and all-blue potatoes. So simple, but so good.  I made this on my stove, but if you use a heavy enough skillet (like cast iron) you could make this right over an open fire.

I trimmed and halved two large leeks, thinly sliced them and rinsed the slices in a bowl of water. Next, I halved and thinly sliced about eight all-blue potatoes. Then in a frying pan I heated a couple tablespoons of olive oil and sauteed the leeks until very tender. I removed the leeks and set them aside on a plate. I added a touch more olive oil to the pan and sauteed the thinly sliced potatoes. When the potato slices were tender and slightly crispy at the edges I added the cooked leeks back into the pan to heat up. Before serving I seasoned everything with salt, ground black pepper and a squeeze of fresh lemon juice. In case you’re wondering, yes, we ate it directly out of the pan while sitting in front of the fireplace.

Did you make anything memorable during the outage?