Last year my backyard garden challenger, who was four years old by the way, gave me quite a run for my money. Her garden was impressive and definitely out performed mine when it came to certain crops. Well, this year just when I thought I had her beat in the zucchini department … she out does me again! I thought I had grown a few crazy large ones, well, they paled in comparison to one of hers. She literally grew one that was nearly the size of her younger sister! Really, no joke.

Her mom asked me what could she make with such a large specimen. When zucchini get to be that large, the insides have become more seeds than flesh. At that point sauteing or eating raw isn’t ideal. I just told her to stuff it … the zucchini that is. 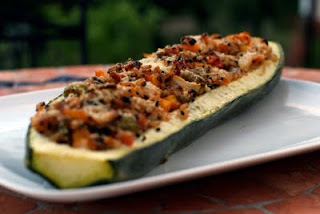 I split the very large zucchini in half and scooped out the seeds and inner flesh. I was careful to leave about a half inch thickness to form the shell for my stuffing. I placed the halves onto a rimmed baking sheet lined with foil and set them aside while I prepped the stuffing. I also preheated the oven to 375 degrees.

For the stuffing, I diced half of an onion and minced two cloves of garlic. I sauteed them in about three tablespoons of olive oil over medium heat until the onion was translucent. Next I added one diced tomato, two diced carrots and four small-to-medium sized diced peppers. When the carrots were just fork tender I removed the pan from the heat and stirred in about two cups of cooked grains (half quinoa, half brown rice) along with another two tablespoons of olive oil, a tablespoon of chopped basil and salt and pepper. Then, I carefully spooned the mixture into the zucchini halves. Before popping them into the oven I sprinkled on grated pecorino romano cheese and drizzled on a touch more olive oil. Into the oven they went for about 50 minutes. I rotated the baking sheet half way through the cooking time.

When the top of the stuffing looked golden brown and the zucchini halves were fork tender I took them out of the oven and dinner was served.