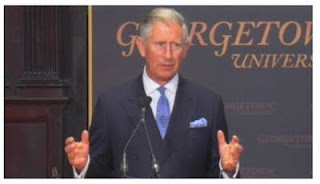 These are a few excerpts from his speech which really struck a cord with me:

The way we have done things up to now is no longer as viable as they once appeared to be…
… if we do not work within Nature’s system, then Nature will fail to be the durable, continuously sustaining force she has always been. Only by safeguarding Nature’s resilience can we hope to have a resilient form of food production and ensure food security in the long term.
…what is a “sustainable food production” system? … For me, it has to be a form of agriculture that does not exceed the carrying capacity of its local ecosystem and which recognizes that the soil is the planet’s most vital renewable resource.
…genuinely sustainable farming maintains the resilience of the entire ecosystem by encouraging a rich level of biodiversity in the soil, in its water supply and in the wildlife – the birds, insects and bees that maintain the health of the whole system. Sustainable farming also recognizes the importance to the soil of planting trees; of protecting and enhancing water-catchment systems; of mitigating, rather than adding to, climate change. To do this it must be a mixed approach. One where animal waste is recycled and organic waste is composted to build the soil’s fertility. One where antibiotics are only used on animals to treat illnesses, not deployed in prophylactic doses to prevent them; and where those animals are fed on grass-based regimes as Nature intended.
…Nobody wants food prices to go up, but if it is the case that the present low price of intensively produced food in developed countries is actually an illusion, only made possible by transferring the costs of cleaning up pollution or dealing with human health problems onto other agencies, then could correcting these anomalies result in a more beneficial arena where nobody is actually worse off in net terms?
We need to include in the bottom line the true costs of food production – the true financial costs and the true costs to the Earth.

You can watch the entire speech and see other conference highlights on the Washington Post website. It’s worth taking a moment to watch.