It feels SO good to be getting back into my “going to the farmers market” routine. My first trip back to Gossett’s Farm Market yielded some simple, yet amazing dinners. This unrecipe is one of them. 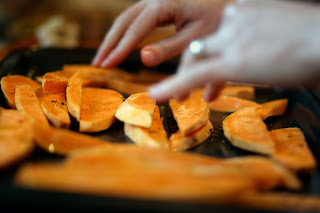 I preheated the oven to 400 degrees. Then sliced two sweet potatoes and tossed them with extra virgin olive oil, salt and black pepper. 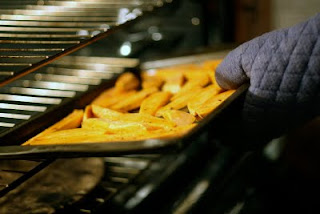 I put them onto a rimmed baking sheet and popped them into the oven for about 20-25 minutes. 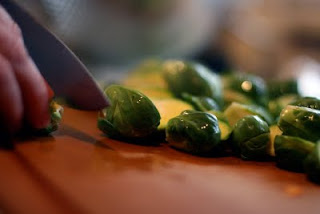 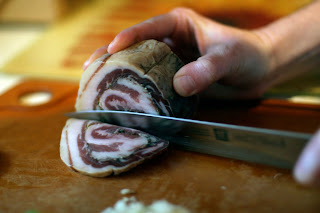 Next I diced a couple cloves of garlic and cut two kind-of-thick slices of pancetta. I took the pancetta slices and roughly diced them. 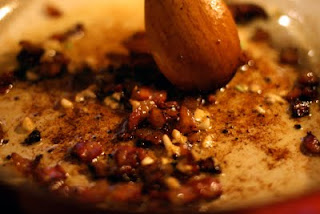 I heated about a tablespoon or two of extra virgin olive oil in a large saute pan over medium heat and tossed in the pancetta. When it was nicely browned I added the garlic. 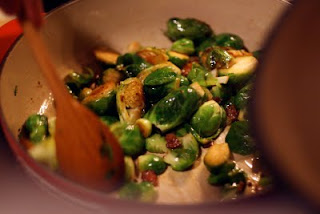 When the garlic became fragrant and lightly golden I tossed in the halved Brussels sprouts. I seasoned things with a pinch or two of salt and let it hang out, occasionally mixing them around the pan. When the sprouts were looked crispy on the edges I popped on the saute pan lid and turned the heat to low. 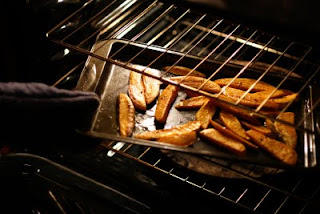 While everything cooked I quickly whisked about a 1/4 cup of balsamic vinegar with a tablespoon or so of local honey in a small pot. I put that over medium-low heat and let it reduce by half. By the time the potatoes were done roasting, the Brussels sprouts were fully cooked (still al dente not mushy). Time to pull everything out of the oven and off the stove. 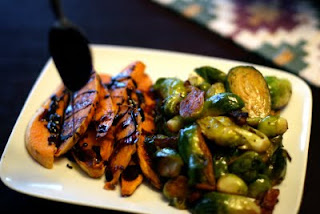 I loaded each plate half with the Brussels sprouts, half with the sweet potatoes. To finish things off I drizzled the balsamic syrup over the potatoes.
And yes, just these veggies are what we ate for dinner that night. It was surprisingly filling and felt so good to have some fresh local produce. Thank you local farmers and local farmers market!
Photos by Renato Ghio