Once again I was having a “what to make for dinner” dilemma. I needed to do something new. Recently we had gone out for Indian food but I was still craving those flavors. So I thought to myself: Why not do a pseudo-Indian dish?

This unrecipe was inspired by a couple of my favorite Indian dishes and was a snap to put together. It may not be authentic, but it tasted great and satisfied my craving.
(I must admit that the only local ingredient in this dish was the homegrown tomatoes. At this time of year local food is scarce and I resorted to organic supermarket produce. I’m not perfect, but something is better than nothing.) 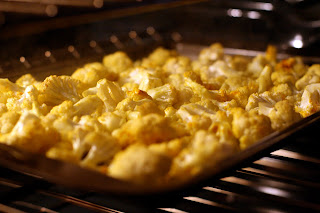 First, I broke the head of cauliflower (gobi) up into small florets. Tossed it with some olive oil, a couple teaspoons of ground turmeric and a pinch or two of salt. Spread it out on a rimmed baking sheet and roasted in the oven at 425 degrees for about 35 minutes. 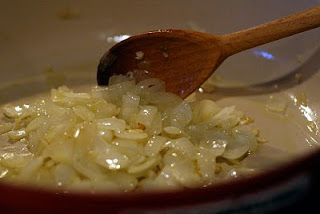 While the cauliflower roasted, I heated some olive oil in a saute pan and tossed in two minced garlic cloves and a diced onion. When the onion became translucent I sprinkled in about two teaspoons of garam masala spice blend. 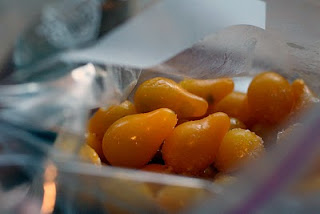 Then, I added about 4 cups of whole yellow pear tomatoes from last year’s garden. I froze SO many of these little tomatoes and they have been terrific for making a thick creamy “sauce.” They basically disintegrate as they heat up. Once the tomatoes melted into a “sauce” I added a cup and a half of cooked chick peas (channa), turned the heat to low and let it all hang out until the cauliflower was done roasting. 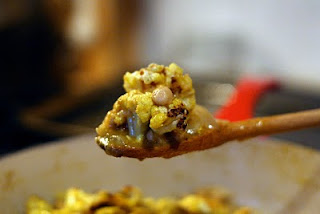 When the cauliflower was nice and roasted (I love when it gets a little crispy on the edges) I mixed it into the saute pan with the rest of the ingredients, added a touch more salt, let the flavors mix for about 5 minutes or so and ta-da dinner is served! 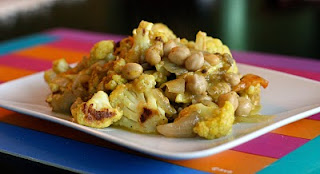 This would be great on a bed of basmati rice, but to be honest it doesn’t really need it. We just ate it as is. While this will never replace dining out at my favorite local Indian restaurant, it was a nice change of pace to bring a touch of India into my kitchen.
Photos by Renato Ghio
This is cross-posted as part of Real Food Wednesday.