Today I read an interesting article/analysis published by the American Farmland Trust. It said according to the U.S. Department of Agriculture’s 2007 National Resources Inventory: Between the years 1982 to 2007, more than 23 million acres of America’s agricultural land were lost to development. That’s an area the size of Indiana! 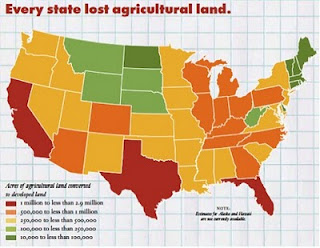 While it said every state lost agricultural land, I immediately wanted to know where my state, Connecticut, stood in the ranks. Not too bad. It was among the group of states that lost the least number of acres of agricultural land to development. In fact, for every acre developed, Connecticut preserved 0.71 acres. We’re not the best, but we’re not the worst. There’s room for improvement.

I know “development” in the name of “progress” is going to happen, but without farms and farmland there isn’t going to be food. Responsible planning, smart growth whatever you want to call it, it needs to happen before even more farmland is gobbled up.

And one last thought: Support your local farmers!