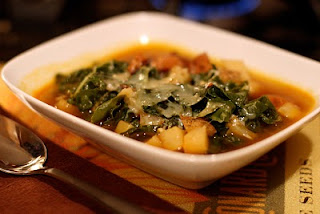 I have been on a chorizo kick lately. The spicier the better! This soup came together in a flash and it’s truly the chorizo that makes it so good.

In a nutshell: In a pot over medium heat I added some extra virgin olive oil, minced garlic and chopped onion. When the onion became slightly translucent I added the diced chorizo to brown. Next I tossed in diced potatoes, mixed it around and let it all hang out. When the potatoes were lightly browned I poured in half a Guinness and let it reduce. Then added in about 6 cups of broth, seasoned with salt, black pepper and a pinch or two of ground cumin. I put on the lid and let it come up to a boil. Once it was at a boil I stirred in chopped Swiss chard. (I normally do a version of this soup with kale, but the Swiss chard was a good substitute.) As soon as the Swiss chard was wilted I served it up with a touch of grated Manchengo cheese on top.
Mmmmm … Spicy, smoky goodness in a bowl.