I don’t know why I never thought of this combination before, but man are these two ingredients made for each other: Brussels sprouts and corn. This dish is lightly sweet, ever so slightly bitter and, with the addition of some bacon, also wonderfully smokey and salty. 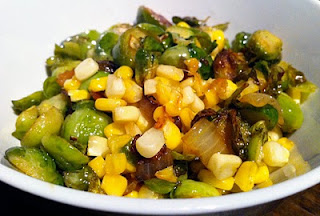 Brussels Sprouts & Sweet Corn
Ingredients
Directions
This dish is definitely going to be a part of my late summer/early fall repertoire. Have you ever tried this combo? What do you think of it?
Cross-posted as part of Food Renegade’s Fight Back Friday.