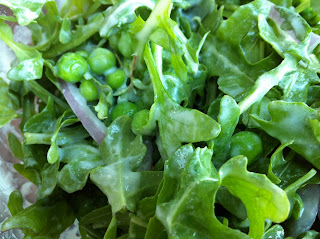 I like to wing it in the kitchen, especially for during the week dinners. I open the fridge, see what’s there and wing it. Last night the only plan I had was to grill some chicken sausage ~ what to make with it was up in the air.

Thankfully the fridge wasn’t completely bare. I had some arugula and about a pound of shelling peas left from the farmer’s market and about half a red onion (not sure where that came from). I shelled and blanched the peas. Tossed the cooled peas into a large bowl with the arugula. I thinly sliced some of the onion and tossed that in. For the dressing I grabbed a soup spoon and plunked two spoonfuls of plain local yogurt into a small bowl. Then I added a couple of big glugs of white balsamic vinegar, a drizzle of extra virgin olive oil, a pinch of salt and pepper and some thyme leaves fresh picked from my garden. I whisked the dressing and poured it onto the salad.
The result was a seriously flavorful “salad on the fly”. It wasn’t planned, but man, I don’t think any one would have known it. I love it when a plan, err, I mean non-plan, comes together.