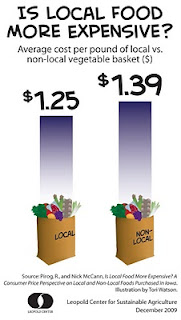 Thanks to Mangochild, writer of the blog Living In A Local Zone, I learned about a study conducted by the Leopold Center for Sustainable Agriculture in Iowa investigating the question: “Is local food more expensive than its non-local counterpart?”

In a nutshell: No.

Note that the study was conducted during peak growing season. It’s common sense that if something is out-of-season, there is less of it and therefore costs more. To me this says when a fruit or veggie is in-season buy it locally for optimum value (and taste)!

Anyway, you can read the entire study as a PDF here.